Is there a way to combine two captures into separate channels in a single capture “file” so that you can easily compare them against the other? This would really help with debugging between two systems.

I tried opening up the capture files myself, but since they’re binary I couldn’t easily figure out how to do the combination.

All that should be required is a time delta input that allows shifting of the two waveforms compared to the other. Ideally that would be a part of the logic software, but if it’s a separate tool that would be fine as well.

@david.pastl Thanks for letting us know your need for this.

The ability to combine captures is actually one of the most requested features right now, and we’re currently tracking this in the idea post below. I’ve added a vote and comment for you to track your need for this. 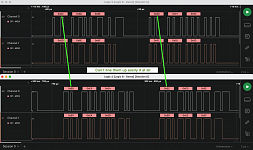 Combine two captures into the same view (e.g. show channel 1 of both captures one below the other) EDIT: I want to be able to compare outputs (digital at least) against each other. To do this I open a 2nd instance of Logic and put it below the first...

Apologies for not having an immediate solution for this at the moment.