We’re still collecting feedback on the new light and dark themes we released in 2.4.2!

In case you missed it, here is a quick sample of the new theme introduced in the last release. 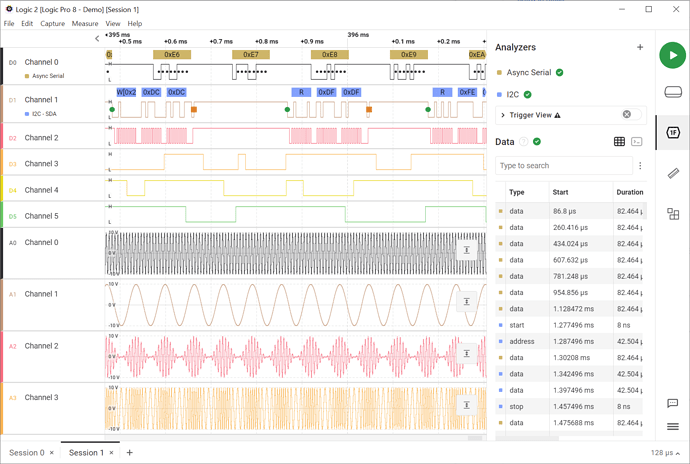 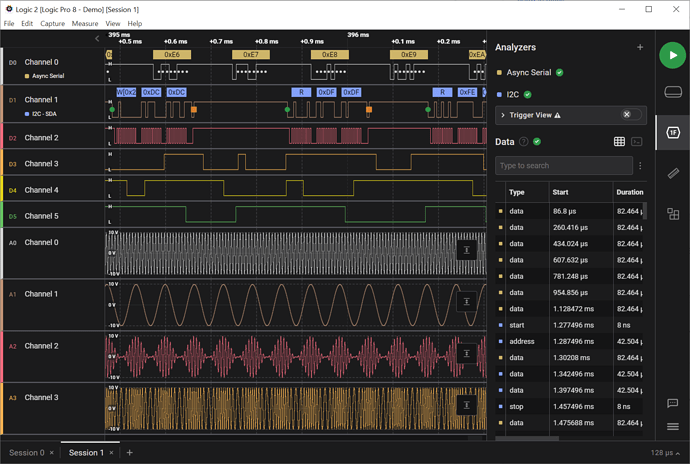 The terminal view is way less legible than it used to be, when the text was colored instead of highlighted. If you insist on using highlighting instead of text coloring, please make the highlighting contiguous. The bright/dark zebra pattern makes reading the console extremely unpleasant.

But better yet, just go back to using colored text rather than highlighting the background in color.

@Adrian Sorry about that! We broke this when we added “light theme” support to our app. We’ve received similar complaints from other users who contacted us, and from others who have posted below.

Download Links Windows - Linux - MacOS Note - we’ve switched off auto-updates for this release, and it’s not available from our main download page, Logic analyzer software from Saleae. This is because the theme work contains thousands of UI changes, with a huge surface area to test. We’ve done about 7 rounds of review internally, but there might still be UI issues here and there, so we’ve decided to slowly release theme support and collect feedback before informing all of our users at once. …

This is currently on our backlog to review.

Downloaded and so far, I have tried it with saved capture. To see if some of the view stuff I reported in previous one was fixed .

So far no, the error message comes up with the text completely hidden.

Which you can see if you switch to the light version:

Not sure yet if I like the light version, yet. Maybe it is something you just need to get used to, but it feels sort of washed out. The Terminal view with different background color, I agree with previous comment. Table view looks good.

Note: it took me awhile to find how to switch. Expected to see something in the view menu.
Finally found it by clicking on the 3bar item on bottom right and choosing preferences…

@KurtE We’re working on a fix for the white error popup. One workaround right now is to highlight the text to make it visible. Essentially, the issue is that we accidentally used white text on a white background

Note taken on the light theme feedback! We’re still planning on polishing that up. The idea initially was to quickly provide a theme that is printer-friendly / documentation-friendly first and foremost.

I have a custom High Level Analyzer that uses the pyparsing Python module. It worked fine before the update to 2.4.3, but now I get a ModuleNotFoundError on load.

Can someone please clarify where the Saleae Python interpreter looks for its modules? Is it possible to use modules that are installed locally (e.g. using pip)?

@gietljohannes With regards to the white-on-white error popup, we’re on it!

That’s strange to hear that 2.4.3 seemingly broke it. As a quick test to confirm this, can you revert back to the last version you remember your HLA working on, and can you test if you still get the ModuleNotFoundError there?

I’m curious to know if this issue was specifically introduced in 2.4.3. I’m not aware of any changes we made with regards to where Python modules are searched.

In the meantime, I’ll check your question below with the software team.

Can someone please clarify where the Saleae Python interpreter looks for its modules? Is it possible to use modules that are installed locally (e.g. using pip)?

Thanks for your response!
It’s still working in 2.4.2, I don’t get the ModuleNotFoundError there and my HLA works as expected.

Thanks for putting so much energy into the Logic2 app. I really appreciate the stream of new features and bug fixes.

I suspect this is something where it’s not possible to make everyone happy without providing configuration madness. I like the higher contrast version, maybe because my eyes aren’t as great as they once were.

In general I agree with @P.Jaquiery that more contrast is better. In this case the lines dividing the channels is less about contrast, for me, and more about extraneous information. I’m used to looking at scope traces based on color and being able to move them so they overlap. I guess I liked the old version because the lower contrast lines were closer to not being there at all

Whatever happens Logic2 is still an amazingly useful piece of software for our team.

Thanks @P.Jaquiery and @eric.blom ! We’re compiling as much feedback we can on the new UI, and we’ve got some polishing to do. I agree, providing the ability to completely customize colors would be the ultimate solution.