Silly question, does it support saving screenshot to a file?

No, we recommend using your OS built-in tool for that, e.g. Cmd+Shift+5 on Mac or WinKey+Shift+S on Windows.
If you prefer to use an in-app tool for screenshots we’d love to know why

I still wish that there were less vertical “dead space” on each channel when they are made as short as possible. 90% of the time I need to maximize the vertical real estate on my screen, so I want as many channels as possible in as little vertical space as possible. I end up with this: 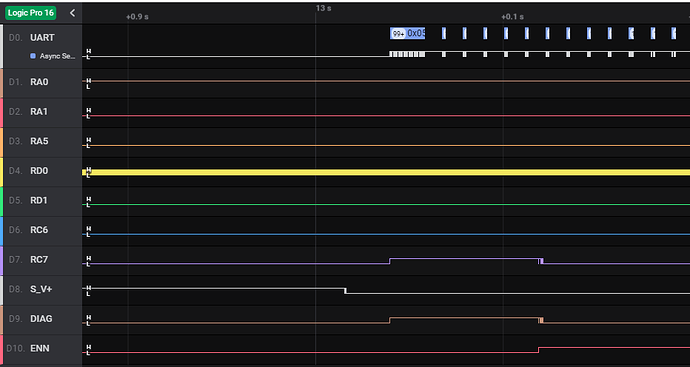 image932×496 17.7 KB
Which works, but visually there is a ton of empty space (vertically) and I’d much rather be have taller signal traces so that I can more easily see what’s a high and what’s a low. It’s just really hard to quickly parse what’s going on when the traces are so short.

I realize that all of that dead space is for the horizontal measurements that pop up as you move your cursor around - and those measurements ARE important. I just wish there were a way for the traces to normally take up the WHOLE vertical space of each channel, and then either shrink (just that channel) automatically if you need to see measurements, or have the measurements overlayed on the signals above and below the one being measured - something so that we can have more vertical ‘signal to deadspace’.

@Brian just to clarify - you want to keep the measurements around, right? Otherwise, you can turn them off and the dead space will disappear

Ahh, I didn’t even realized I could do that! That will be a big help - I don’t see how to turn them off though. Where do I do that?

Still, they are very useful every now and then - it would be nice if the interface could adapt and only use up vertical space for measurements when it needed to and not all the time.

Oh! I got it now. Thanks! That’s a global setting, right? So why wouldn’t it be in like a preferences menu somewhere? Seems like if I right click on a channel, that change should ONLY apply to the channel I right clicked on (i.e a local channel setting).

Just to be thorough, usually on linux you can press the PrntScr button on your keyboard and it takes a screenshot. Alt+PrntScr I believe captures just the active window. This works at least on Ubuntu derivatives.

I’m using capturing mode in Loop mode and stream the data to the terminal.
Application closed after two days operation. Now I recognized that on my test pc the harddisk is full.
I guess that the data is temporarily stored on hdd. But I do not find the location of the temp files .
thx

ok I found it. within AppData\temp I suppose it is named analyzer_db*
It seems that they are never cleaned up.

This is a development of a feed-back already listed as Q4.

Instead of displaying an error message when the selected 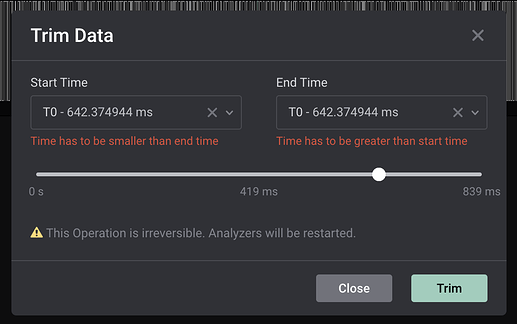 As T1 comes after T0, selecting T1 as start and T0 as end also results in an error. 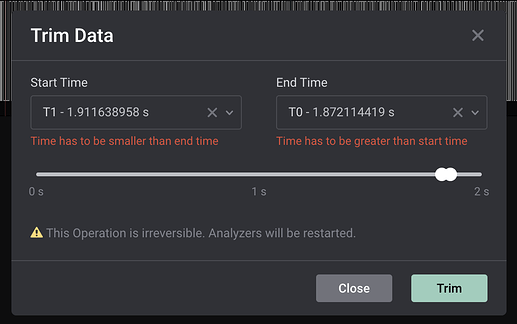 I suggest to display only the markers strictly after the marker selected for start time, T1 only in the example below. 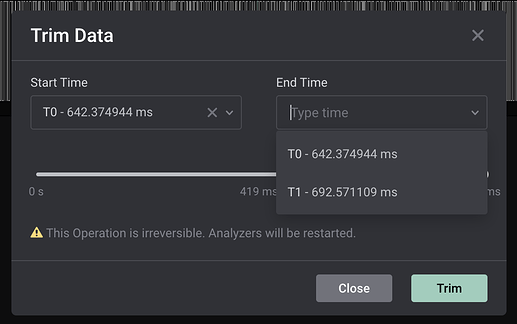 Please add your ideas (or vote on it if it already exists) if you haven’t already on our ideas site: https://ideas.saleae.com/b/feature-requests/. Thanks for your feedback.

Is there any option to define a different temporary folder ?
I do not want to write 250Gbyte temp data every two days to my labPC on SSD

Technically speaking, those are not ideas for new features, but feedback on existing ones. Hence the post on the alpha release threads since the very beginning.

Thanks Rei. I’ve added your feedback to our product backlog.